I am an unabashed fan of screwcapped wine (mainly because I hate corked wine but not needing a corkscrew is a plus too!) so I am always excited when I hear about consumer research that indicates that wine drinkers are accepting it more. A new study has come out that indicates that US consumers who are neutral or positive towards screwcaps has increased from 47% to 57% from 2004 to 2005. 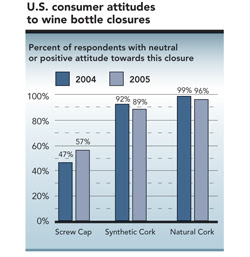 While this is definitely a step in the right direction, closer examination reveals some problems.

While consumers may be "accepting" of screwcaps they aren't crazy about them. Only 15% say they are positive about screwcaps against 42% who say they don't like buying wine with this closure at all. Most disturbingly, a similar study that asked specifically about the context the screwcapped wine was going to be consumed in (and also included respondents from the UK, France and Australia) the acceptance of screwcaps by US drinkers plummets in more "premium contexts" - special occasions, gift giving & dinner parties. 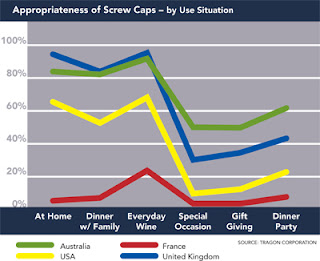 As someone whose dream is to make super premium Pinot Noir the lack of acceptance of screwcapped wine in these contexts where consumers are willing to pay $30+ on a bottle of wine is concerning. However the two bright spots in the study are in Australia where the acceptance of screwcaps remains above 50% in all consumption contexts and the UK (Australia's biggest export market) which is also well above the US rates in "premium contexts" and just as high as Australia in more informal ones. One would think that the UK numbers will continue to rise once more producers like UK market leader Jacobs Creek put their entire range under screwcap including their Johann Cabernet which retails for £ 40.

Maybe it will take a Robert Mondavi to make the leap here? What do you think?
Posted by Andrew Nielsen at 1:52 PM