International Pinot Showdown — US vs Australia (with a Shiraz/Syrah coda) 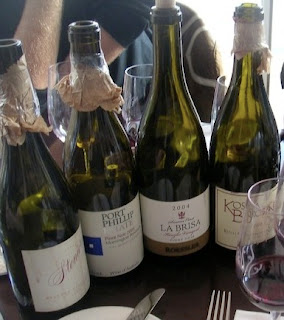 The name of the restaurant was all I needed to hear — Bird, Fish, Cow. Sounded like a great excuse to see how Russian River, one of America's top Pinot regions, matched up against Mornington Peninsula, which has been heralded as the region that will put Australia on the world Pinot map. Considering all the controversy that erupted out of the Mornington Peninsula International Pinot Noir Conference, the theme seemed timely.

Wines were tasted blind by a group of eight wine geeks in Sydney during my eight hour layover on the way from Los Angeles to Wagga Wagga. All that we knew was that one wine in each flight would be Australian and one would be American.


The Stonier was leathery and had an unpleasant green stemminess along with a dash of band-aidy Brett and a dab of VA. On the positive side there was some bright red cherry, plush strawberry, and some snappy acidity. Once the bag was lifted it was a bit of a shock, I had really wanted to like this wine. Especially after James Halliday had practically drooled all over it. Bummer.


The Roessler was your prototypical Russian River Pinot on the first whiff. Cherry cola, forest floor, red berries (raspberry and strawberry) and baking spice. Super plush in the mouth, nice acidity to cut the ripeness of the fruit with a long high toned finish.


Group Vote: 8 votes for Kanzler, 0 for the Stonier


The Port Phillip was very well constructed. Sandro Mosele is one of Australia's great Pinot artisans, a bottle I had recently of his 2004 Kooyong Estate Pinot Noir was superb. The Port Phillip was the most feminine wine of the day — not light, feminine. Opens with violet, dark cherry and maybe some plum. Very "juicy" in the mouth with elegant tannins that will make for damn tasty Pinot in a couple of years but still approachable now.


The Kosta Browne Russian River was a great wine. Seeing as I am working with them, I feel I must refrain from commenting except to say that I voted for this bottle. 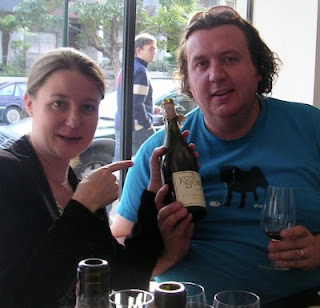 
Can you say Deep Purple? The John Duval was an opaque, deep purple verging on squid ink! Wow! Blackberry, violets, dark cherry, plum and some oak. In the mouth cocoa and vanilla show themselves too. Fantastic balance of fruit, alcohol, wood, and tannins. Will be even better in a few years when the tannins get a chance to settles down because the are B-I-G right now.


Carlisle is one of my favorite Syrah producers and so I was excited to have it matched up with the John Duval. Once it hit the glass, I was sure this was the Carlisle, in fact I was so sure I have fuzzy memories of offering to run down the road naked if I was wrong. Almost rivaling the John Duval for color this is definitely the Carlisle I have come to know and love. Big and ripe aromas fly out of the glass - the first thing that hits me is freshly baked blueberry pie and pepper. Blackberries, smoke, bacon fat and licorice follow. Massively rich mouth-feel — this is almost more of a sensory experience than a wine. Kudos to Mike Officer!


Group Vote: 5 for Carlisle, 3 for John Duval
(although it should be noted that the table thought that the scores may be reversed if the tasting was held in 2010.)