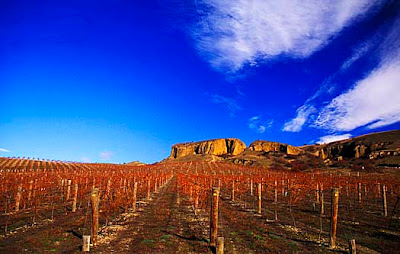 Readers of the blog may already know that in April I am off to Felton Road in New Zealand for the 2008 harvest. So I thought I might write a couple of posts about who Felton Road is and why I am so excited to be heading there to learn how to craft Pinot Noir.

Felton Road is located in Central Otago on the South Island of New Zealand, which at latitude 45° is the most southerly wine growing region in the world.

Unlike the rest of New Zealand's viticultural regions, Central Otago has a continental climate, rather than a maritime one. Most of the New World's most promising Pinot Noir regions so far have been maritime ones -- Russian River Valley in California, Mornington Peninsula in Victoria for example, in which the delicate Pinot Noir grapes are cooled by morning fog and cool ocean breezes. Central Otago, on the other hand, is dry (less than 500mm of rain a year, often much lower), with very low humidity, and has a climate most similar to Burgundy of any of the New World's Pinot Noir regions. Central Otago is also 300m above sea level (again, similar to Côte de Beaune) with the same hot Summers and frigid Winters. The dry continental climate also means that the Summer nights (with no cloud cover) are cool with temperatures getting as low as 1° C at harvest time. This big variation in diurnal temperatures is perfect for Pinot Noir which excels in such conditions - the reason being that the hot days (and greater UV penetration at 300m above sea level) ensures proper sugar and flavor development while the sudden drop in temperature overnight keeps acid levels high - a key quality of top Pinot. As an aside, this is one of the reasons why I think the Macedon Ranges in Victoria will end up being Australia's great Pinot Noir region but that is another subject for another time.

Another reason why Central Otago holds great promise is the poor quality of the soils. All the great vineyards in the world have poor soils. Vines are essentially weeds and grow in pretty much any conditions. However when nutrients and water are too readily available, vines tend to put too much energy into vegetal growth as well as producing too many clusters of fruit. This leads to plump, flavorless grapes unsuitable for premium wine. Under "stressful" conditions (low nutrients, little water) the vine thinks to itself that it is in danger of dying and will instead put all of its available energy into passing its genes into the next generation - just what a vigneron wants! Low water also ensures that berries stay small which is especially important for Pinot Noir which needs a high skin to juice ratio to produce world-class wine. Central Otago is mainly sand on top of a gravel base, which allows water and nutrients to drain quickly and thus become unavailable to the vines.

Thus Central Otago has all of the necessary ingredients to be the "Southern Burgundy". In fact in the mid 1890's the New Zealand government paid for Romeo Bragato, a Yugoslavian viticulturist to travel around the country and recommend the areas with the most potential for the development of a wine industry. In his "Report on the Prospects of Viticulture in New Zealand" he wrote:-

"There is no better country on the face of the earth for the production of Burgundy grapes than Central Otago."

Sadly, his report was ignored and instead it became sheep country and it wasn't until Felton Road was founded in 1991 that this began to change. Felton Road's 14.4 hectares of Pinot Noir, Chardonnay and Riesling that were planted in 1992 represented over 20% of the vines in the whole of Central Otago at the time! Felton Road's incredible success since their inaugural vintage in 1997 has made the wine world take notice and now there are over 1,00 hectares under vine with the region well on the way to being considered alongside the Willamette Valley, the Russian River Valley, amongst others, as the future of New World Pinot Noir.

Central Otago is obviously still an incredibly young wine growing area - Felton Road's oldest vines are only fifteen years old and they were the regions pioneer's but it seems like Romeo vision of Pinot Noir heaven has finally arrived -- even if it is 110 years late!
Posted by Andrew Nielsen at 6:27 AM

Oh my! I realize this comment is belated, but I just experienced the 06 Felton Road Block 5 Pinot Noir (and two of their Chardonnays) and was stunned. Here is a wine that has the gentle texture of a great Burgundy but still maintains its personality as a wine from New Zealand. In fact, I'm writing about it on my site tomorrow as this week is all about "terroir," and the wines that truly exhibit it. That the opportunity to work the Felton Road harvest came your way...oh, so jealous!