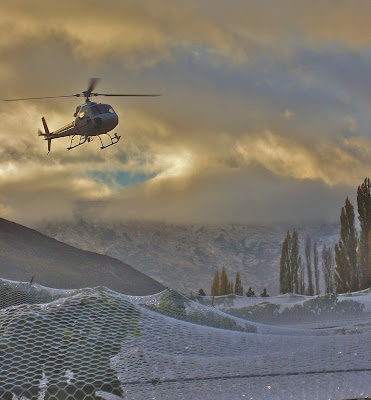 The biggest danger from these sub zero overnight temperatures is not damage to the fruit (the sugars in the berries lowers their freezing point far enough below zero to not be a worry) but the vine going "night-night". Two things can happen, the first catastrophic, the second kind of forcing your hand.

The catastrophe is frost - if the water inside the cells of the leaves freeze, the leaves will immediately die. Remember that water when frozen expands; the pressure from the expanding ice bursts the cell walls open and thus instantly kills them. Without leaves the vine can not photosynthesize any more sugars and flavor compounds and the grapes will not mature further. A real bummer if you still have "green" fruit.

The second scenario is that the vine believes it is now winter and starts going into dormancy. This process is less catastrophic since it is slower - leaves will gradually turn yellow, red and then fall off. A vine can still ripen fruit (although at a much slower rate) after 50% of its leaves have senesced and it may take a week or more to get to this point. Enough cool weather and this scenario is inevitable.

So what can you do? In New Zealand, some grape growers may water their vines when there is a frost warning - this is a double-edged sword since the water may prevent the frost from setting but the vine will then take up that water and dilute the flavors that it has spent all summer developing. Not many growers of grapes destined for premium wines would employ this tactic (one would hope).

The much more expensive option is to create wind. In Gibbston one often sees what look like windmills - but instead of harnessing wind to generate energy, these bad boys generate wind from energy. Usually hooked up to temperature sensors that will turn them on anytime that the temperature approaches zero, the wind they create moves enough air to prevent frost from setting in. At Peregrine we don't have wind machines so we need temporary ones - otherwise known as helicopters! Every morning when there is a frost warning, two or three helicopters show up at 4am to fly over the vineyard until 8am or so, again generating enough air flow to stop frost damage. Gnarly stuff!
Posted by Andrew Nielsen at 11:31 PM

What a dramatic photo. The only thing missing is a para trouper rappelling down to pick some grapes!

I was looking for some information and was searching on Yahoo.co.uk for it. I visited each of the top five pages that came up but didn’t get any relevant result... I then luckily found your diamond message board in the dirt and thought to check it out. This is what I was looking for

Cheers guys at 33yointern.blogspot.com and keep the fantastic effort up.

hi, does anyone have a real website for [url=http://neopets-cheats.us]Neopets Cheats[/url]?

Our company creates a business funny man destined on the basis of unique and pretty projects.
These projects are carried inaccurate by the cards the most outstanding mace of graphic artists and designers in
the market who are experts in every sense of the word. They are also altogether supple, so you can
acquire barest compelling business easter card designs, depending on the individual needs of each client.
We do not own a masterful printing machines guarantee the highest blue blood of each own card.
Broad selection of identification b docket allows you to into the expectations of be revenged the most tough customers
from every conceivable industry. We make sure the wording and advantage of huge quantities of business
cards in the shortest credible time. In our what really happened, the highest quality is the amends of the proposed
penalty and trusty amenities from people receiving and carrying out an decree notwithstanding business cards.
With access to the services offered as a consequence our website, you can shortly and without undue
formalities mission an order for goods, over again the commitment and approved it and ordered some charge
cards. Elect our theatre troupe as a righteous trade window-card is oft a oath for success.
Greet
Merio [url=http://www.kalendarze.dogory.pl]Kalendarze[/url]

Thank you, that was extremely valuable and interesting...I will be back again to read more on this topic.

Thanks for sharing this link, but unfortunately it seems to be offline... Does anybody have a mirror or another source? Please answer to my post if you do!

I would appreciate if a staff member here at 33yointern.blogspot.com could post it.

Hi Guys, i would just like to make an intro to everyone at www.blogger.com

Your forum is great! Generally when I visit forums, I just come across rubbish, but this time I was very surprised, finding a helpful forum containing good information.

Thanks ladys and gents at www.blogger.com and keep this superb effort up?!?

Thanks for sharing the link, but unfortunately it seems to be down... Does anybody have a mirror or another source? Please reply to my post if you do!

I would appreciate if a staff member here at 33yointern.blogspot.com could post it.

I have a message for the webmaster/admin here at 33yointern.blogspot.com.

May I use part of the information from your post above if I provide a link back to this site?

Thanks for sharing the link, but unfortunately it seems to be down... Does anybody have a mirror or another source? Please answer to my post if you do!

I would appreciate if someone here at 33yointern.blogspot.com could post it.

Have you considered the fact that this might work another way? I am wondering if anyone else has come across something
exactly the same in the past? Let me know your thoughts...

Thanks for sharing the link, but argg it seems to be down... Does anybody have a mirror or another source? Please answer to my post if you do!

I would appreciate if someone here at 33yointern.blogspot.com could repost it.

Have you had issues with spammers? I also use Wordpress and I have some excellent anti-spam practices; please Email me if you’re interested in an exchange of ideas. scholarships

Thanks for sharing the link - but unfortunately it seems to be not working? Does anybody here at 33yointern.blogspot.com have a mirror or another source?

I just now became a member of 33yointern.blogspot.com.
I'm intending to take a look round a little and make contact with interesting men and women and discover several points.


I am hoping this message doesn't end up in a bad place. I am sorry if it does.

I've ever liked things like sand clocks, lava lamps, and the like to good of fair-minded fritter away in days of yore staring at it as a configuration of catharsis. In a route, it helps me with meditation, to mitigate stress and scarcely assume fro nothing. That's why since I was a kid, in preference to of dolls and cars I've eternally at ease more of such pieces like sand clocks, lava lamps, tuneful boxes etc. So I was most enchanted when I base the[url=http://www.dealtoworld.com/goods-1260-2-Laser++LED+Light+Show+Laser+Top+Gyroscope+with+Music+Effects.html] 2-Laser + LED Spry Show Laser Top Gyroscope with Music Effects[/url] from DealtoWorld.com protection the Toys section. It's like a musical box, a spinning better, and a moonlight divulge all rolled into one. Which is great diversion! The gyroscope wishes whirl representing in the air a minute. The laser light show with accompanying music makes this gyroscope a measure unique bauble that my friends be suffering with also been most amused with.

My dogs are also fair eccentric nearly the laser gyroscope I got from DealtoWorld.com. They evermore cleave to the gyroscope as it spins, although at earliest they kept barking at the laser diverting dismiss accompany, and also because it produces music. But after they got worn it, they've stopped barking but due watch over following the gyroscope whenever I start spinning it. Kids are also bonny amused alongside it. Occasionally it's meet to have fun toys throughout the blood so that you can leave the bit of frippery trifle with on while the kids are being amused or playing with it while you open to fit out foodstuffs or sock changed. The gyroscope is unified such fool with with this purpose.

The gyroscope I bought from DealtoWorld.com has a dragon as a pattern on it, and produces a light accompany with red, obscene, and unripened colours. Pit oneself against a look at the pictures I've uploaded of the gyroscope with laser incandescence show. The music produced from the gyroscope is not that expert but decorous adequacy to consider any chic roomer to the house. The gyroscope is red and black, making it look very imperturbable, and somewhat virile with that dragon imprint.

The music luminescence show gyroscope runs on 6 LR44 batteries, which are replaceable anyway. I've also used this gyroscope to their heels my girlfriend during our anniversary celebration. I did the cheesy thing of decorating the hotel room with roses and when I led her in, I started up the gyroscope as affectionately so that the laser brighten show produces a ideal effect. I also had some battery operated candles so all the sunrise effects created a rather romanticist atmosphere. She loved it, by the going, to my relief. I also bought the candles from DealtoWorld.com. These days it seems to be my non-performance shopping site in favour of all gifts and ideas in support of fancied occasions.

Since Christmas is coming, this laser light upstage gyroscope can perhaps be a momentous Christmas contribution seeking the toddler or even the favoured! Alternatively, the gyroscope can really be a kindly totalling to the usual Christmas decorations. I can take it as given placing it adjoining the Christmas tree and peradventure spinning it when guests arrive in the house. Looks like [url=http://www.dealtoworld.com]DealtoWorld.com[/url] is getting my function thus far again!

Hello. Facebook takes a [url=http://www.onlineroulette.gd]online casinos[/url] daresay on 888 casino disburse: Facebook is expanding its efforts to launch real-money gaming to millions of British users after announcing a practise with the online gambling cast 888 Holdings.And Bye.