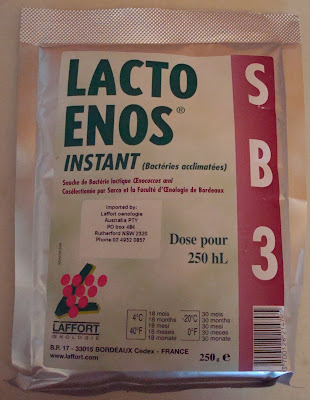 Above is a packet of dehydrated lactobacilli - our little microbial friends who turn malic acid into lactic acid. 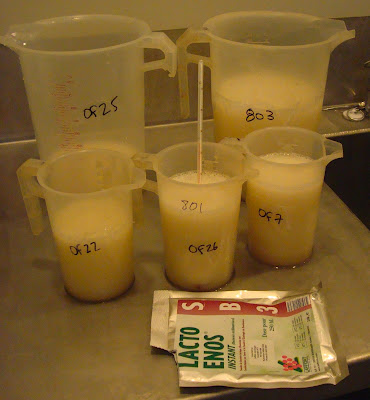 This is five minutes later - five malolactic inoculations ready to rock - at the cost of $1000 a packet, these are some expensive measuring jugs!

Malolactic fermentation (MLF) is the process where lactobacilli convert malic acid, which is more acidic, into the less acidic lactic acid. This lowers the pH of the wine and also creates a rounder mouthfeel - lactic acid is the main acid in milk! Malolactic Fermentation is a must for all red wines and most whites - your steely unoaked chardonnays and rieslings are prevented from going through malolactic fermentation to retain more "crispness" in the mouth and keep the acid at a palate cleansing level.

For years scientists couldn't understand what was in it for the lactobacilli since no energy is released when malic acid is converted into lactic acid. Very recently however it has been shown that the electrochemical gradient of having a higher pH inside the bacterial cell (all the malic acid) and the lower pH outside the cell (the wine now having lactic acid instead) is high enough for the bacilli to use it as a generator (think of a battery - the voltage is the electrical gradient between the two terminals). Amazing, huh? Life will always find a niche!
Posted by Andrew Nielsen at 11:44 AM