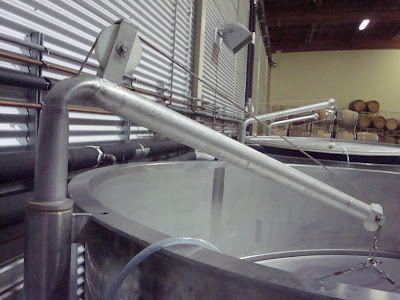 Have a look at the photo above. Notice anything unusual about the tank in the foreground?

Yes the arm is completely bent and broken. How did I do it and what did I learn about the laws of physics?

I was barreling down the free run wine from our Rosella 828 fermentations which we drained into this variable head tank that you see the top of in the foreground. A variable head tank works by having a lid that can lower down to various levels allowing you to have a 2-ton up to a 5 ton tank. The lid is held in place with a gasket that you blow up to a pressure that does not allow air into the tank.

I made the mistake of not releasing the air from this gasket (nor removing the bung that also seals the tank - consider me 0-2 here) before I barreled down. I had barreled down about 200 gallons of wine before I realized my mistake. Too late the damage was done!

It amazes me that the vacuum that I created could bend a steel bar - physics 101 lesson for today I guess.