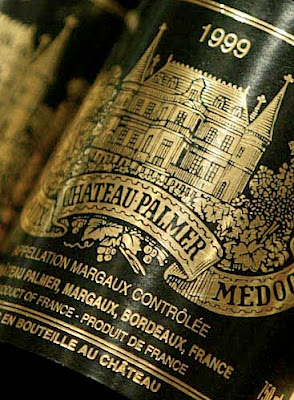 Since we were sorting the last of the merlot from Jemrose Vineyards for the new Jemrose Estate label, Shane Finley (the Associate Winemaker at Kosta Browne) opened this treat for us.

Château Palmer is a third growth Bordeaux estate in Margaux, whose grand vin is a blend of 45-ish percent Merlot, 45-ish percent Cabernet Sauvignon and between 5 and 8 percent Petit Verdot.

1975 was heralded at the time as "a vintage of the century" (funny how the French always have around ten or more of those a century) but not all of the wines have been up to the hype. Our bottle deteriorated very quickly in the glass. The first few whiffs were classic aged Bordeaux. Plums, earth, mushroom and dried herbs filled the nose. Very smooth, soft palate with a touch of grip left from the tannins. I was amazed they were still here after 32 years!

An enjoyable wine, but I wish it held together more. It was all over in about an hour - completely fell apart on us. Oh well, back to the sorting table
Posted by Andrew Nielsen at 10:22 PM