A great pinot tasting at university 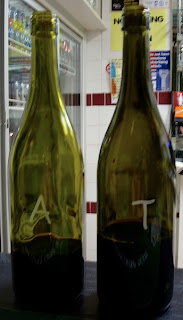 One of my fellow students at Charles Sturt University brought a couple of very interesting barrel samples to the bar last night. Like Kosta Browne, he likes to ferment small lots, treat them in different ways (always with love) and then use interesting oak barrels for maturation.

Last night we had two 2007 barrel samples - both came from the same upper block of their estate vineyard (his winery is in Tasmania), both were barreled from the same fermenter. Both had spent six months in a 2006 François Frères oak barrel - since it is 2006 barrel it has been once-filled with 2006 wine, this is the second fill (normally this tones the oak influence down as compared to a new barrel). The only difference? One barrel was made with oak from the Allier forest and one from the Tronçais forest (he had brought a third bottle whose oak came from the Vosges forest but he dropped that in the driveway?!).

Both bottles were raw and primary, typical of most barrel samples, with a bit of H2S aroma (H2S usually blows off the wine over time in barrel, maybe a subject of a post in the future perhaps). There were marked differences between the two. The Allier was much more feminine, with elegant and elevated oak notes while the Tronçais had a more powerful and primary oakiness. On this occasion I did enjoy Tronçais barrel the most - in the past, with Californian barrel samples primarily, I have had a preference for the Allier but it just worked with this particular block of fruit.

What I took away from this was the influence of where the wood in a wine barrel comes from. A lot of the time we spend so much time talking about the advantages and characteristics of one cooper over another, maybe we should look at the forest a bit more. Food for thought and maybe for tasting when I am back in the winery.
Posted by Andrew Nielsen at 3:40 PM